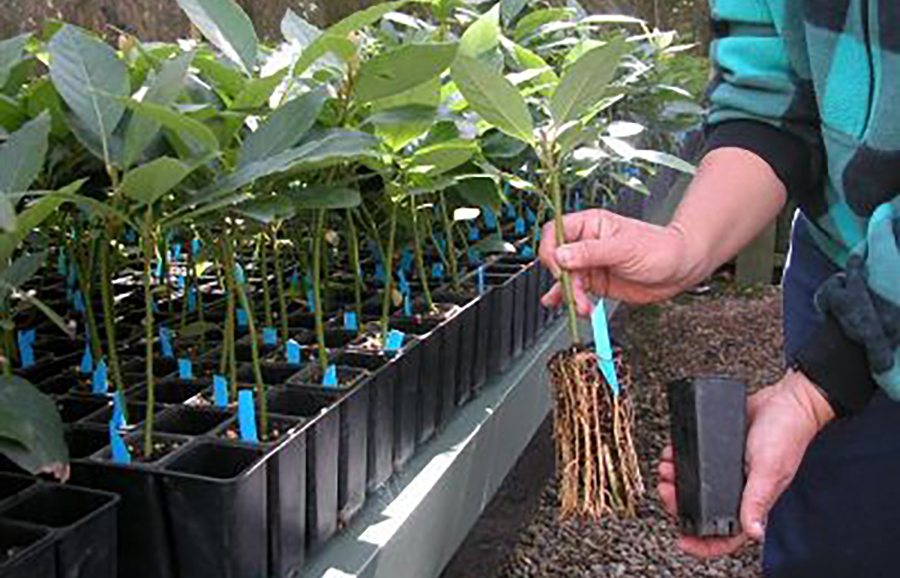 Maluma Hass (and other varieties like Pinkerton, etc) on the Bounty avocado rootstock grow a smaller more open tree (less leaf area) compared to all other rootstocks in the breeders orchard eg Velvick, Dusa, Martin Grande.
Don’t plant Bounty rootstock in good quality soil as it’s too vigorous.
Bounty rootstock appears to perform best in poor quality soils, waterlogged soils, heavy soils and generally in the poorest quality soil types.
Some of the orchard blocks had been in standing water for the past 3 weeks with little evidence of any effect on the variety planted on Bounty rootstock. According to the breeder, the Bounty rootstock can survive waterlogged soils for many days while any other avocado rootstock will die within 48 hours.
Phytophthora tolerance of Bounty appears to be similar to Duke 7 rootstock.
Maluma Hass propagated on Bounty in poor quality soils had an equivalent yield compared to Dusa and other rootstocks like Velvick in many of his orchard blocks. Tree size is smaller than all other rootstocks and the trees appear much calmer.
In summary, the Bounty avocado rootstock is recommended for planting in any marginal soils types including waterlogged or wet, heavy soils or in marginal climates affecting avocado production. Yield levels under these conditions would be similar to avocado trees grown in good soils on other rootstocks.”